Here I am. After fasting intermittently for the last 2 years I have finally decided to take it to the next level and measure my metabolic state, the effects of fasting and the ketones level in my body.

I want to know when my body burns the most fat, when I am at the deepest ketosis and how does that change depending on the hours fasted. And after reading countless pages of studies on Intermittent Fasting I knew that one of the best ways to get this information is by measuring ketones in my body.

Through quick research, I found out that there are basically 3 ways to measure ketones in my body: through urine using keto strips, through blood analysis and through a simple breath using ketone breath analyzers.

Giving blood each day is way too complicated and expensive in the long run. Urine strips like Ketostix are great but not very accurate in the long term. But measuring ketones through breath sounds both – simple and convenient and I decided to start from there.

I’ve checked what’s on the market and found a couple of devices that help with that and in this article, I’ll be reviewing the new kid on the block – BIOSENSE(™) breath ketone monitor.

But first, I think it would be useful to cover some basics on ketones and ketosis. If, however, you want to jump straight to the review, click here.

Full disclosure: I’ve received BIOSENSE(™) ketone monitor as a gift from the company itself for testing purposes, but that did not affect my opinion on this product.

What are ketones, what is ketosis and why does it all matters?

I must confess – before immersing myself into Intermittent Fasting I haven’t even heard of the word “ketones” before. Keto…what? Is it how people that are on the ketogenic diet are called? Is it food?

If you have read more about WHY and HOW fasting works, you may already know  – ketones are chemicals that are produced in our liver when insulin and glucose are in short supply. [1]  Ketones are basically an alternative fuel source our body uses as an alternative to glucose.

Most of us know that our bodies take carbohydrates ingested with food and turn them into glucose. But what does our body use to produce ketones?

Answer: it uses our body fat and fat we consume.

Amazing isn’t it? Our bodies are basically like hybrid cars. When the internal combustion engine runs out of primary fuel – glucose, our bodies are able to switch to the alternative engine – a ketones motor fueled by fat.

But why are ketones important? Well, the main goal of the keto diet and fasting is to get our bodies into the state where it no longer has enough glucose to burn and switches to the ketones. We can achieve that either through limiting carbohydrates intake by nutrition (think low-carb diet/Atkins diet/Ketogenic diet) or by depleting our body of any food for an extended period of time – fasting.

This metabolic state where our bodies burn fat turns them into ketones and uses it for energy is called ketosis. That’s the holy grail of everyone who is on keto or doing intermittent fasting. Ketosis is when the real magic happens – you start to lose body fat, autophagy gets triggered and you start seeing other benefits.

We can reach different levels of ketosis based on the level of ketones in our blood. But to understand how deep we are in ketosis we need to measure it. And that’s where BioSense ketone breath meter comes in.

According to their website – BIOSENSE™ is the only clinically-backed breath ketone monitor, launched in Dec 2019.

In my own words – it’s a pocket-sized device that you blow in for a few seconds and get readings on your ketones levels. Really simple, yet really useful regardless if you have just started your fasting journey or already way underway.

Is it any good? How does it work?

First of all, I must say – from the first chat we had with the company’s CEO Jim Howard, I knew that this company is legit. They stressed the fact that they are the first and only breath ketone monitor in the market, backed by extensive clinical research and it made me way more comfortable recommending this product to you guys.

When talking with Jim, he was quite excited explaining the underlying operational mechanism called “Deep Lung Technology” (can it get more Sci-Fi name than this? :)). It basically measures the level of acetone molecules in our breath and adjusts the readings for natural variations in exhalation time and lung capacity across individuals. As a result, a device gives you accurate ACEs level readings.

What’re ACEs you ask? ACEs are a unique unit of breath acetone provided by BIOSENSE™. Acetone is a byproduct of ketogenesis and is exhaled through the lungs and studies have shown that blood and breath ketones are closely related. ACEs approximately equal to 10x the blood ketone equivalate – for example, 0.5 mmol/L in blood corresponds to an ACEs level of 5.

Now when we know what ACEs are, we need to understand how to interpret levels of ACEs throughout the day, in order to make informed decisions about our diet and lifestyle.

BIOSENSE™ device gives you ACEs readings from 0 to 40+ which are also color coded from blue to green to red, indicating the optimal level of ketosis. 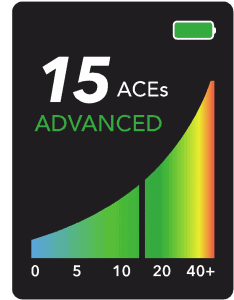 Here is a more precise table on how to interpret your ACEs readings: 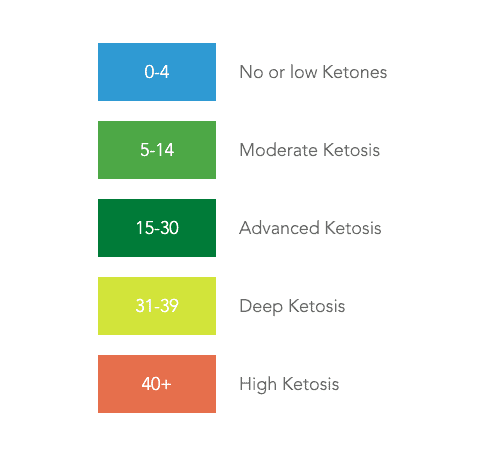 Basically, the higher your ACEs, the more fat is being burned for fuel in your body.

What’s interesting is that there was an article recently published in The New England Journal of Medicine states that the beneficial threshold of blood ketones is 1mM, which would translate to roughly 10 ACEs.

Personally, I haven’t reached 10 ACEs even after 20h of fasting (still had black coffee), but it’s worth noting that due to individual differences in our bodies and metabolism, I might need 30h of fasting to reach 10 ACEs and you might need just 15h. That’s why a device like BIOSENSE™ is really handy when taking your intermittent fasting and keto diet seriously.

You will get $20 off when clicking this button!

How to use BIOSENSE™?

It’s literally way simpler than I thought. Your turn on the device, wait till it is ready, blow into the mouthpiece for 3-5s and get the readings immediately. The whole process takes 60-90s and the longest part of it is the initial prep part that the device does on itself. After 10-15s of displaying the results, the device starts the auto-cleaning procedure and eventually shuts itself down.

It is battery-operated that can be charged through a micro-USB port. On average, the battery lasted me 6 days and charged fully within an hour.

The design of the device is quite apple-esque. There is a color screen and two buttons – one that you use to turn ON, turn OFF and start measuring the ketones and the other one that is used for accessing device settings like date and measurement history.

You can use BIOSENSE™  unlimited amount of times per day, however, they advise to give it at least 1h in-between measurements to get a measurable difference in the ACEs levels. I usually use it in the morning, then at 16h fasting mark, then right before my first meal and just before going to bed.

What’s really handy is that the device stores up to 100 measurements directly on the device. You can then download the mobile app, pair your phone with the ketone monitor using Bluetooth and visualize your true, total fat metabolism rate over time.

It’s worth noting that the app is probably the weakest part of the whole package. The reviews show multiple users having issues with unstable Bluetooth connection and app crashes. It did happen to me once as well.  The company, however, just released its new syncing updates on both the device and mobile apps to address this issue. 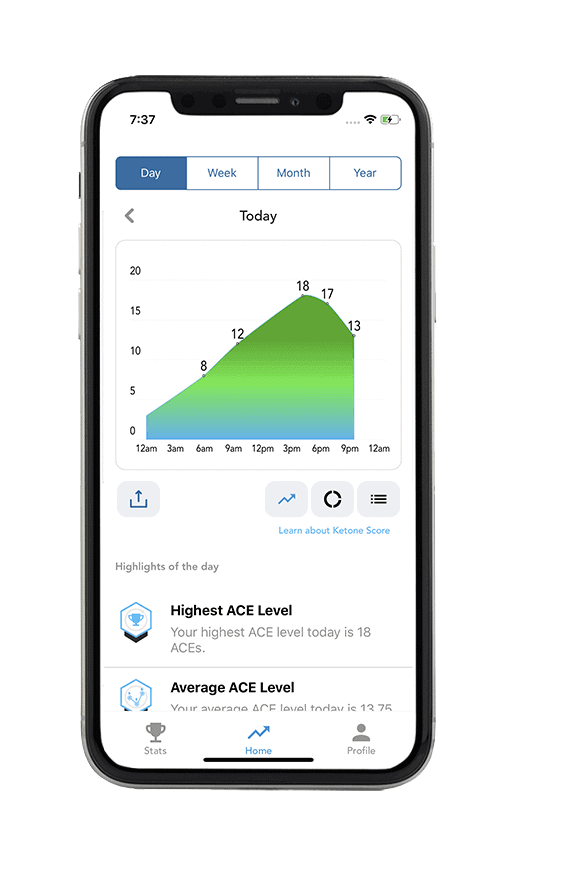 Pros and Cons of measuring breath ketones with BIOSENSE™

My tips for using BIOSENSE™ :

You will get $20 off when clicking this button!

I’ve been looking for an easy solution to measure ketones and I found it. Yes, it is more expensive when compared to urine sticks, but less expensive than blood measurements over the course of the year. But if you’re serious about getting the best results from fasting and a ketogenic diet, this is the investment worth making. In the words of management guru Peter Drucker: “If You Can’t Measure It, You Can’t Improve It.”

RESEARCH and TEXT BY: 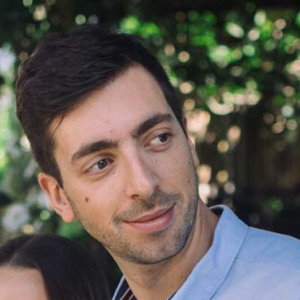 Tauras is the founder and face of the 21 Day Hero. While being obsessed with mind and productivity hacks, he is hooked up with HIIT type group training and cooking gourmet meals almost every day. Tauras is widely known in the startup community for his kick-ass social media and marketing skills too!

Intermittent Fasting Headache: Here’s How To Cure It

OMAD Results: What to expect from One Meal A Day Diet 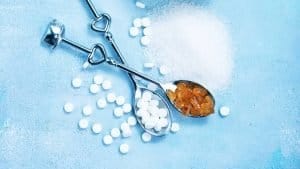 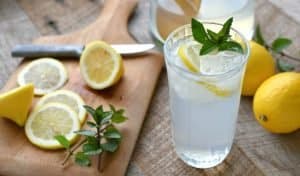 Does Lemon Water Break A Fast?

PrevPreviousProlonged Fasting 101: How To Do It & Are The Benefits Worth It?
NextIntermittent Fasting and Working Out Combo for Maximum ResultsNext
Menu

limited time offer: 2 for 1 on all challenges and meal plans ➔ ➔ ➔